A function attached to an object is called an instance method and it has two differences from a normal function:

This lifts object from mere custom-compound-data to something more, something profound…. objects! All right, we already called them objects, but things with lots of data fields and lots of functions all bundled up together are so incredibly useful they have become the basis of most programming in the 21st century. We really don’t do much with boring old ‘int’ or ‘char’ values, we are much more likely to use some object, after all - it has methods attached!

You will see striking uses of methods especially after we cover Composition.

There were methods just waiting for us already, on the String objects we have been using:

An example of how these methods are called on a String objected str is:

In each of the above cases, we call the method on an object (in this case str). This object, on which an instance method is caled, is known as the calling object.

Creating our own methods

In a separate client code, we call this method on an instance of class Rectangle as,

We don’t have to pass values of instance variables to instance methods.

A special reference - “this”

When we call the instance method area on object r1, a reference copy of r1 is made into this which is available while r1.area executes. When we access width (or this.width), it’s the instance variable width of the calling object (r1 in this case) that is accessed. Same goes for height.

However, if the instance method needs some parameters outside of the instance variables, those must be passed. For example, if you need to resize a Rectangle object, the factor by which it must be resized needs to be passed to the method.

The method call to shrink object r1 used in the previous example by 50% in each direction would be r1.resize(0.5);.

A method returning an object (typically of the same class)

Inside a method, one must (typically) not modify the calling object.

Hence, instead of the method resize that we wrote in the previous section, we should create a resized Rectangle object and return it instead.

It is very common to have to compare objects. This is done through the compareTo method, that is called on an object (calling object) with another object of a comparable type (usually an object of the same class) being passed as a parameter (parameter object). It returns,

The definition of more or less or same is determined by domain-specific criterion/ criteria.

For example, two rectangles can be compared on the basis of area as,

Let’s see an example of how we call compareTo and what happens in the memory: 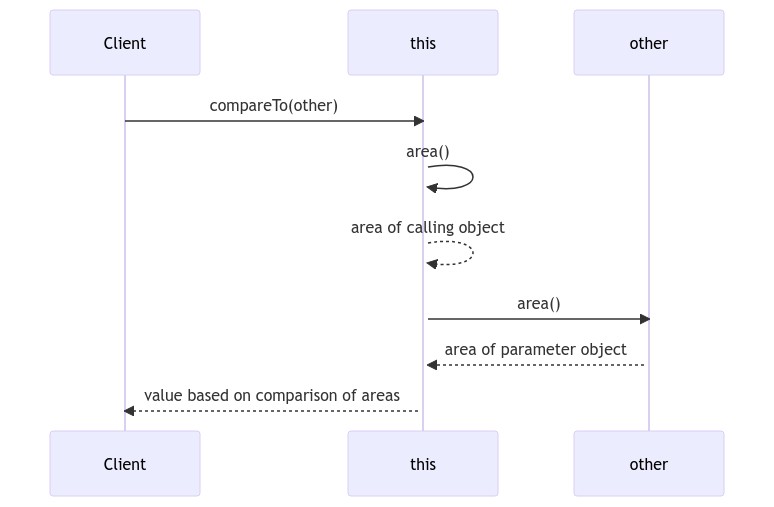 Special methods all objects have

Thanks to a feature of Java we will learn later there are some methods that “come for free” in every class (and thus are attached to every object). A few of these are interesting to us:

Distinction between static and non-static

Members (both variables and methods) in a class can be declared as,

The following example illustrates the differences: